If you are a non-member or do not have login details for the Chamber website, you can book your place by emailing [email protected]

Online Zoom Event Once registered, a calendar invite will be sent to you which will contain details and a link to join this event None

As part of our 21in21 Women in Business Programme, join us for this ChamberLIVE event where we will be joined by Major Samantha Lucas-Floyd who will discuss what strong leadership looks like.

Open to all Chamber Members

About Major Samantha Lucas-Floyd
Major Samantha Lucas-Floyd joined the Army in Mar 2006 as a Soldier into the Royal Military Police. She completed her training earning the rank of LCpl and was posted to Osnabruck, Germany to conduct General Police Duties. Subsequent postings included Aldershot, Bulford and the Major Incident Room where she worked as an Indexer using the HOLMES System as part of the Iraq Historical Allegations Team.

Whilst here she applied for a commission and after successfully passing the Army Officer Selection Board she attended the Royal Military Academy Sandhurst in January 2012, commissioning into the Adjutant Generals Corps (Staff And Personnel Support) in December 2012.

Following her trade training she moved back to Germany for a posting to Hohne and subsequently deployed on the last tour of Afghanistan; Op HERRICK 20. Here she deployed as the Regimental Administration Officer (RAO) responsible for tri service personnel of the Role 3 hospital at Camp Bastion.

Maj Lucas-Floyd was posted to 1 Royal Irish in Ternhill where she took the decision to leave the Regular Army.

Following a short stint as an Operations Manager for Mitie she went back into the Army fold to take a Full Time Reserve Contract as the Media Officer at 159 Regiment, Royal Logistic Corps. Once available she then moved back as the RAO of this Regt where she has been since 2018.

She is married to Jackie and has a French Bulldog called Milo.  When time allows, she enjoys traveling, skiing and theatre.

Once you register for this event, you will be sent a calendar invitation from [email protected] which will contain the Zoom link and details for you to join the event.

If you book a place and are unable to attend, please cancel your place in writing with 24hours notice by emailing [email protected] 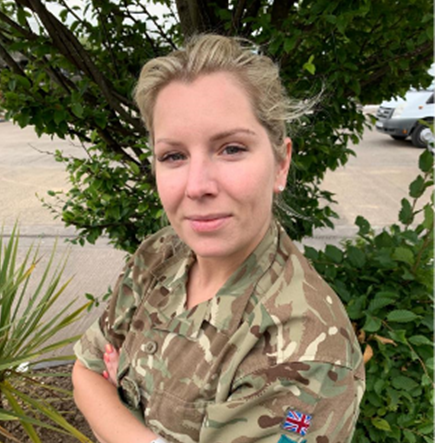